Why You Have Eaten Insects Without Knowing It

According to entomologist Marcel Dicke from Wageningen University the average person in the west eats up to 500g of insects annually through processed vegetable-based products and foods dyed with insect derivatives. Putting that into context, 500g is half a standard bag of sugar! But thinking positively those insect fragments are not going to do you any harm, I know because I've been eating several whole insects and survived the experience. 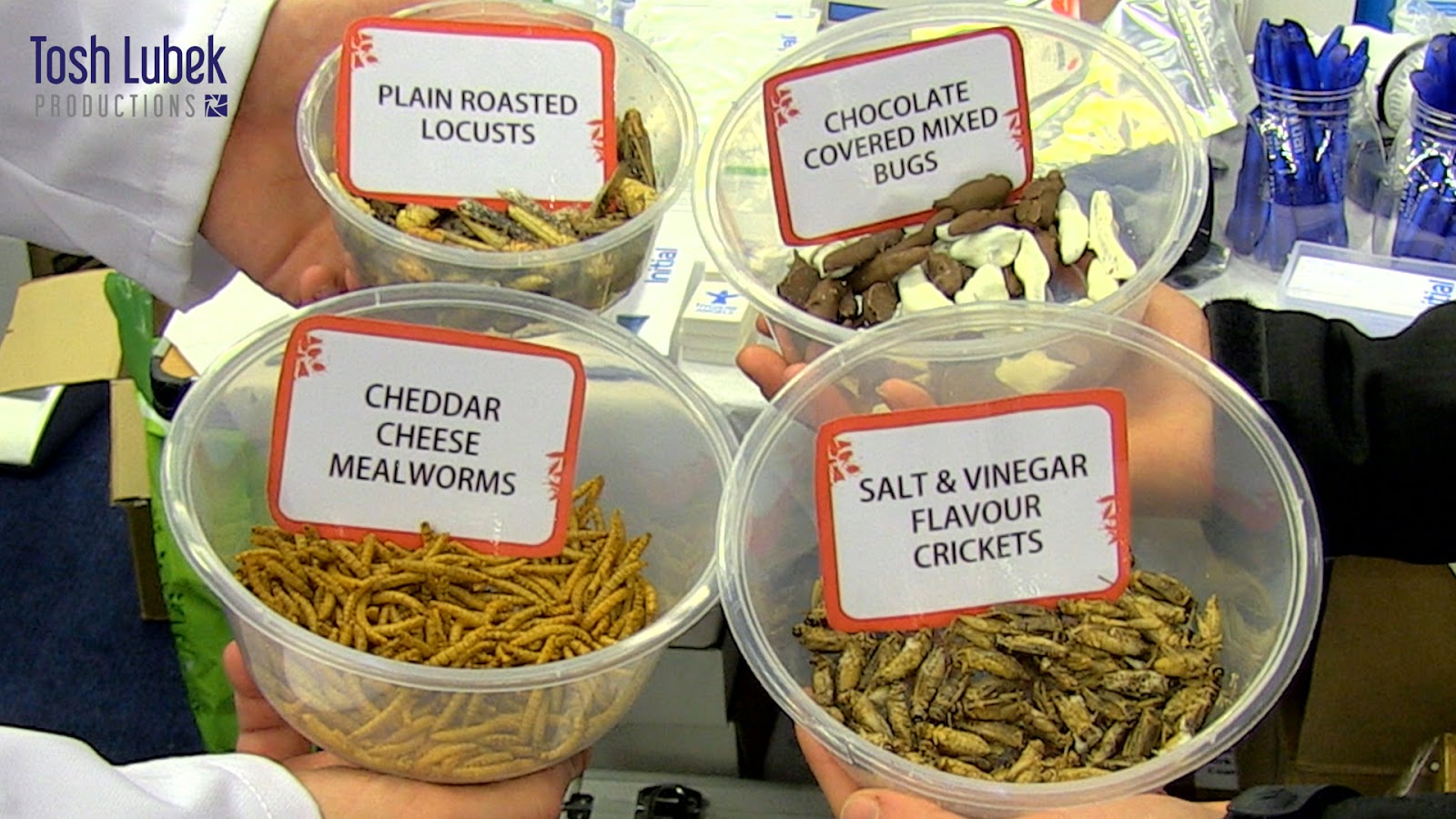 Recently I had the opportunity to find out what bugs taste like when I took the Rentokil-Initial pestaurant challenge. If you watch the video you will see how I got on and I promise this bush tucker isn’t gross. The guys from Rentokil-Initial offered me a range of insects including roast locust, salt and vinegar crickets, cheddar cheese mealworms, chocolate coated bugs and a scorpion lollipop. You may have noticed something from that list, most of the insects were flavoured because the reality is they do not taste of much. To me the roast locust tasted a bit like bland Shreddies but when cooking regular food we season and add flavourings so perhaps that applied to bugs as well. The one thing I did discover was that they did not taste terrible or disgusting, even the appearance of the locusts and crickets was OK.

Why eat insects and bugs


In terms of sustainability farming insects is an environmentally friendly way of producing animal protein and good fat that could also be quite cheap. Producing insects uses 1,000 times less water than that require to raise beef and insects are far more efficient at converting food into protein. According to Professor Dicke 10kg of feed could sustain 9kg of locusts whereas the same amount of feed would only produce 1kg of beef, 3kg of pork or 5kg of chicken.


The UN says that for about 2 billion people edible insects are already part of their diet. Bugs are highly prized in many eastern countries as a good source of protein with Thailand being the largest consumer. The Thai insect industry is estimated to be worth about $50 million annually. Street vendors in Bangkok serve up insects in street markets although most western tourists tend to stick to the more familiar foods. In many parts of the world certain insects and bugs are considered luxuries or delicacies.

Why we should be eating more insects


Insects can be tasty, a fantastic source of nutrition and their production is far more environmentally friendly than raising traditional livestock.


Since farming insects is much more efficient than raising beef we would need far less agricultural land to produce the same amount of protein. Insects are also good in terms of greenhouse gas emission. Beef production accounts for about 37% of human induced methane emission, a gas that is 23 times worse than carbon dioxide when it comes to global warming. By reducing traditional livestock and moving to insect farming we could be well fed and reduce our impact on the environment. It would be sustainable agriculture.


Eating insects is also healthy. Insects have far less fat than beef and whereas beef is about 18% protein the meat of a grasshopper approaches 60% protein. So if you are worried about fat and your arteries a diet of insects might be a good choice.


What insects to eat 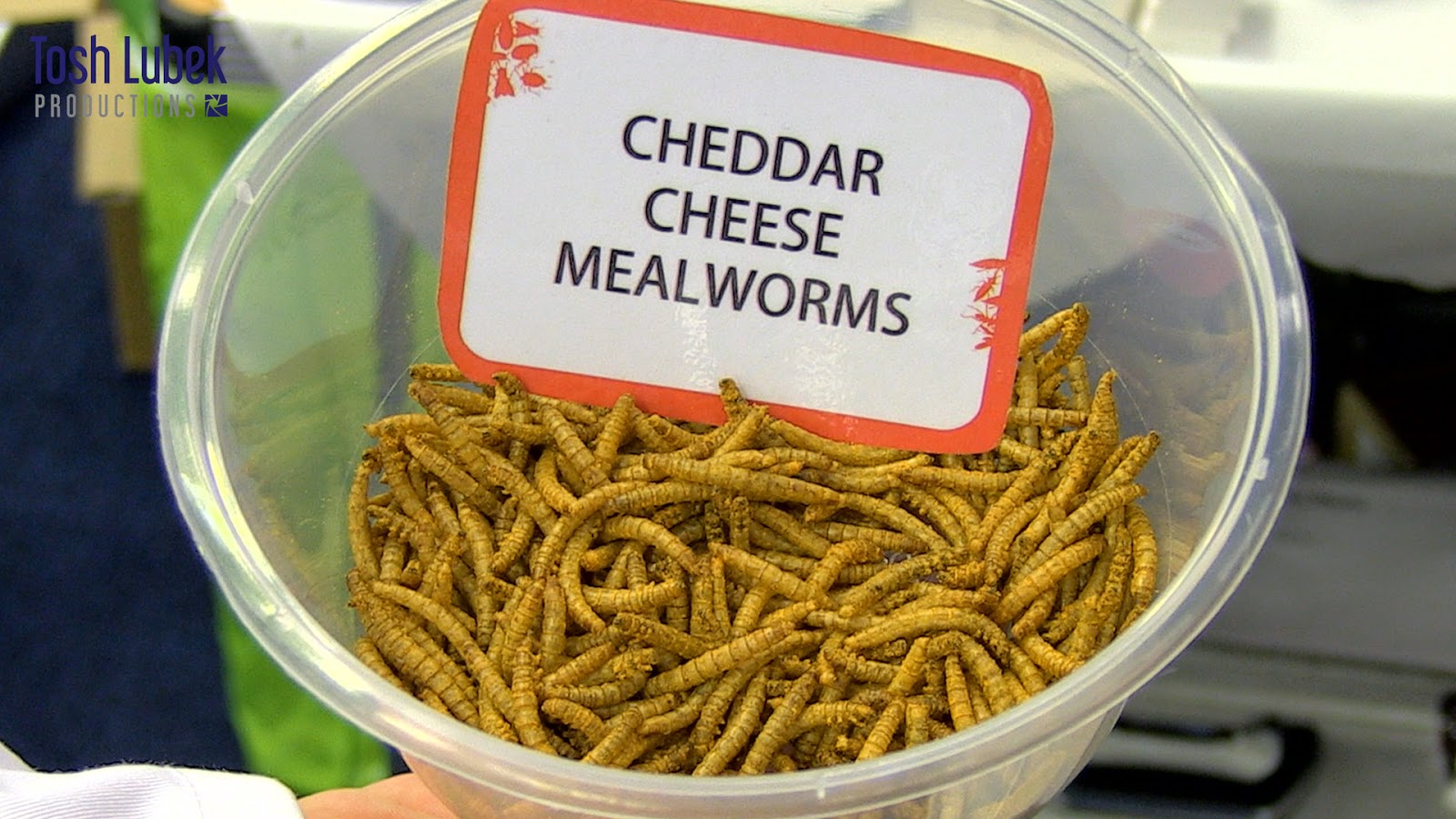 Mealworms are the larval form of the mealworm beetle and feed on stored grains. The mealworms I tried were cheddar cheese flavour and had a marked similarity to cheesy corn puffs. Mealworms can be boiled, roasted or fried and can be bought as a snack food. They are said to have a nutty flavour. Mealworms can easily be raised at home, feed them on oats, wheat bran and some vegetables or fruit as a source of moisture. Any you don’t eat will be eagerly taken by your garden birds.
Crickets 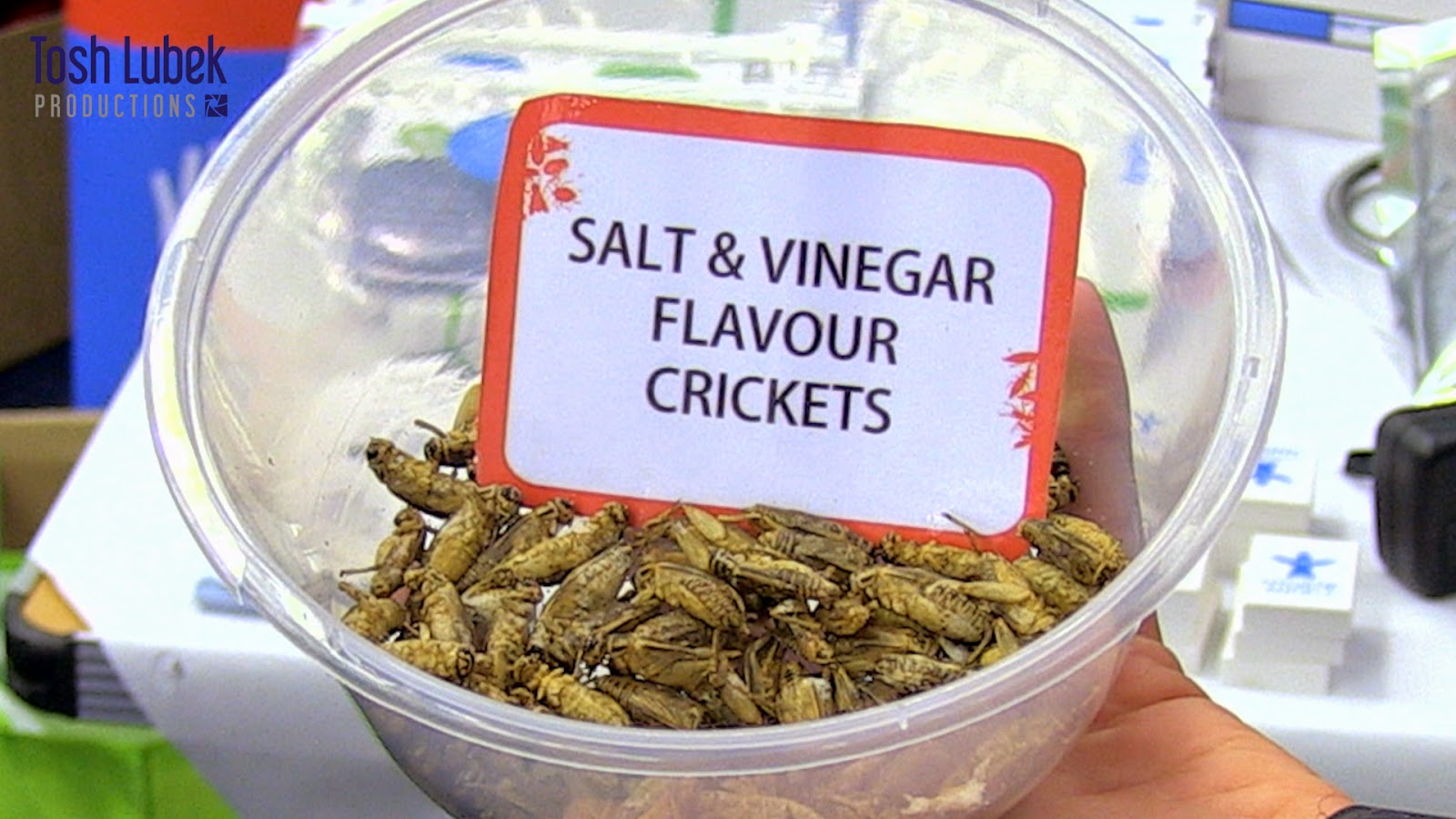 Like all the insects I tried the crickets were dried and flavoured, in their case they were salt and vinegar flavour. The house cricket is the most common type to be used for human consumption. Crickets are widely eaten in Thailand, Cambodia and Mexico they are often boiled, pan fried or roasted. 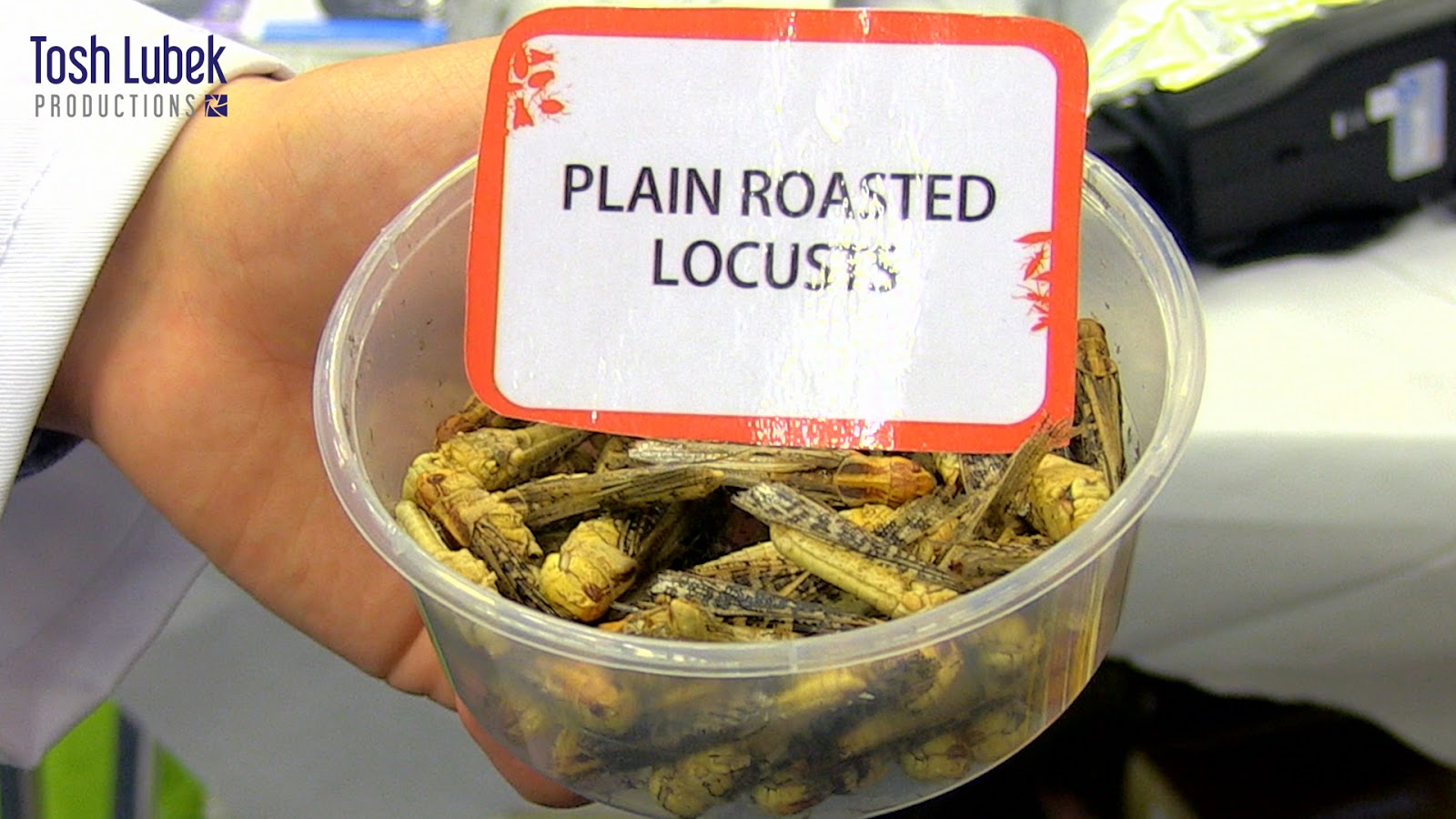 Locust is a biblical food and considered kosher. I tried roasted locust but they can be cooked and prepared in many ways including pan or stir fried, deep fried in batter, barbecued and boiled. The choice is yours.

UK Readers
If you watch I'm A Celebrity Get Me Out of Here these Bush Grub Crispy Critter Taster packs are officially licensed from the show but unlike the bush tucker trials in the TV programmes these are not disgusting at all. The Crispy Critters have been oven baked for crispness and flavour. The pack contains a selection of four crispy critters. BBQ worms, Mexican worms, Salt and Vinegar crickets and Curry Crickets. Yum Yum! The flavoured Crickets and Mealworms and are available on Amazon UK. 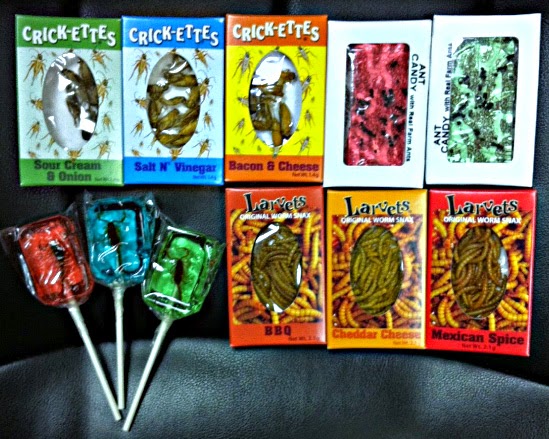 For an interesting article on eating locusts see this BBC article: http://www.bbc.co.uk/news/magazine-21847517