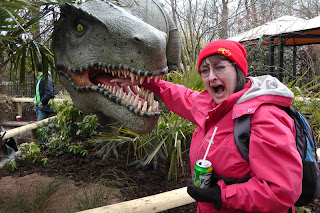 South West Scotland is booming to the roar of pre-historic beasts at Dino Park, Scotland's newest dinosaur attraction. The leafy labyrinth at Carrutherstown features a walkabout safari trail, a massive Tyrannosaurus Rex and Spinosaurus plus 13 other dinosaurs.


Dino Park recently opened at Hetland Garden Centre and Ayrshire based Tosh Lubek Productions was given responsibility for creating the sound design for the exhibits as well as the park's online video on their website www.dinopark.co.uk.

Tosh Lubek said, "The sound design brief was to create believable soundscapes while recognising Dino Park would be a fun attraction. It's pre-historic natural history served up Hollywood adventure style."


Obviously no one knows exactly what creatures sounded like in the Cretaceous, Jurassic or Triassic periods but children have a clear impression of what dinosaurs should sound like thanks to movies like Jurassic Park plus TV and arena spectaculars like Walking With Dinosaurs. Because entertainment is a big part of Dino Park Tosh Lubek Productions had to satisfy children's expectations while creating soundscapes that were also credible. Tosh Lubek said, "We started by researching each dinosaur species on show to ensure the sounds we chose or created were realistic. Armed with that information we searched our own sound effects library, which has perhaps 50,000 sound clips, then looked at specialist online sound archives."


It was a big task to create the sound design since soundscapes seldom come ready made and sound effects are often in the form of individual elements. "We had to piece together the elements for the environment and then the dinosaurs themselves, a kind of aural jigsaw puzzle". Tosh Lubek continued, "There would be a sound of a Dino moving through it's environment, brushing against bushes, their footsteps, mouthfuls of vegetation taken and then munched. Think of it as painting with sound to create an aural picture. Sound is more important than you might think in creating an authentic experience and in building emotion. Try watching a nature documentary or movie with the volume turned down and you will get the idea."


Dino Park owner, David Wilson said, "The quality and professionalism of the sound and graphics done by Tosh Lubek for the Dino Park far exceeded our expectations, and has made the visit hugely enjoyable and memorable for many children and their families."


Visitors to Dino Park will be thrilled by the collection of dinosaurs including long necked favourites Brontosaurus and Brachiosaurus, towering at 22 feet tall, the three horned Triceratops, spiked tailed Stegosaurus, and ferocious Velociraptors. Tosh Lubek Productions has certainly helped bring the pre-historic heavy weights alive for visitors and Dino Park is certain to be a big hit with children and dinosaur fans alike.

ABOUT THE AUTHOR: Tosh Lubek is an award winning writer/producer and founder of Tosh Lubek Productions, a company based in the West of Scotland that creates website videos and radio advertising for clients across the UK and Ireland.